The LOSSAN rail corridor stretches 351 miles from San Diego to San Luis Obispo, with the Amtrak Pacific Surfliner, freight, commuter, and long-distance trains sharing the tracks and certain stations. Ongoing construction projects keep the infrastructure in top condition and contribute to overall improvements in rail travel along the corridor. Larger projects require tracks or stations to be closed so crews can perform necessary work, which can temporarily affect train service.

The tracks in south San Clemente have been closed to passenger rail service since late September 2022 out of an abundance of caution after officials noticed movement of the tracks and the adjacent hillside. Emergency construction work has successfully stabilized the area, and a safety assessment has cleared the way for rail service to resume. OCTA, the agency leading the construction, is estimating that the project will be complete by the end of March 2023.

Pacific Surfliner service through San Clemente will be restored on weekends. On weekdays, shuttle bus service will continue to connect passengers to trains at Irvine and Oceanside, as crews complete construction and landscaping activities.

On Saturdays and Sundays, beginning on February 4, limited train service will be restored between Los Angeles, Orange, and San Diego Counties with no bus connection required, including:

Construction work will continue on weekdays, and is expected to finish by the end of March. To ensure worker safety and the most efficient completion of the project, the existing schedule will remain in effect Monday through Friday, as follows: 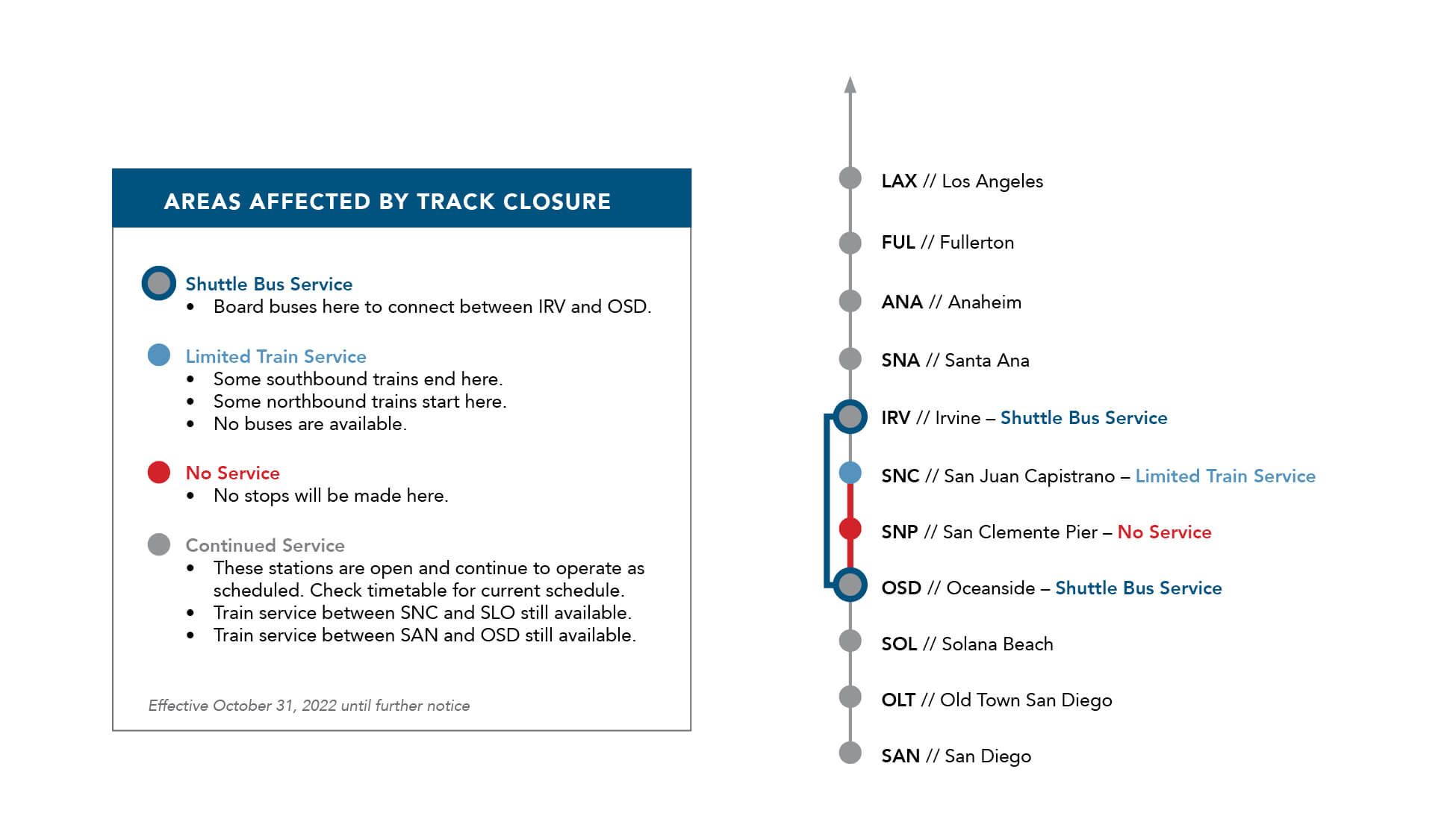 The tracks north of Goleta have reopened following a two-week closure for repair work. Pacific Surfliner service resumed between Goleta and San Luis Obispo on January 30, 2023. The following schedule updates are now in effect:

Scheduled track work in San Diego County will affect Pacific Surfliner service on March 11-12 and 25-26, 2023. On these dates:

More details will be available soon.

There are no station notices at this time.

Due to ongoing work related to road crossings between Camarillo and San Luis Obispo, trains are subject to delays of approximately 30 minutes when traveling through the area. Union Pacific Railroad is working to minimize these delays. In addition, the schedule for Train 594 has temporarily been pushed 15 minutes later for all stations (departing Los Angeles at 10:35 p.m. and all following stations) to accommodate the work on the north-end of the corridor.